The creative block has lifted!

I’ve recommenced work on the Garden Door – it is turning out quite different to what I anticipated but I am oddly going with the flow.  It may even change some more, especially given I used (well tried to use) acrylic paint on an enamel surface.  I did sand it back quite considerably first but there still seems to be some conflict – they don’t want to play nice together.  The solution is yet to be resolved…

I don’t normally share as I go but today I have.  Here are some progression shots.

The only issue now is time.  I worked additional hours this week as I was involved with the setting up for Stage 4 of the Tour Down Under.  The first grass start ever in the world for this event (apparently).

I wasn’t overly fussed about the race itself until I saw a portion of it.  Police cars, flashing lights, police bikes, helicopters – it was like marshall law had been declared!  Somewhere in amongst all that were the cyclists (I think?)

Anyway the result was that I wound up working for an extra 20 hours – all in a row.  3am start and a midnight finish.  I worked out that, in a 48 hour period, I was awake for 39 hours, worked for 29 hours and slept for 9 hours.

Gruelling I tell you!  At one point I swear I could feel my actual soul, and it was hurting.  By the end I literally felt drunk (not in the good way).

I looked in the mirror when I got home and scared the crap out of myself – my eyes were demonic red, as if I’d just escaped through a portal from hell.  It kinda felt that way too.  As it turns out, I like sleep, a lot.

As I was actually working (hard!) I only managed to get a few photos.

A sea of blue as the BUPA community riders prepare for their 6.30am race start.  (Crazy buggers, at least I was paid to be awake that early!).

The sea of riders becomes a tidal wave as they spill from the start gates. 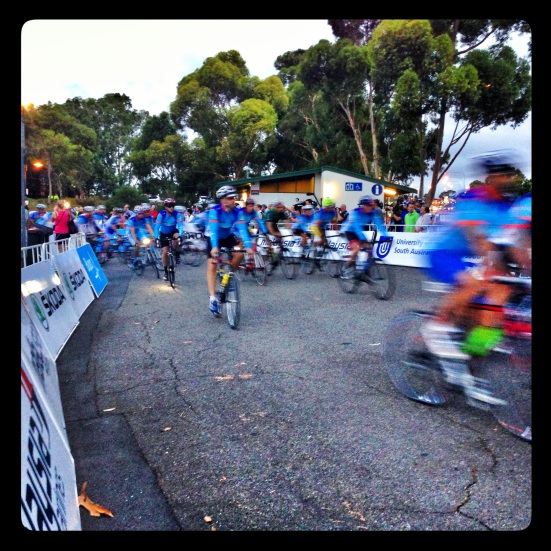 The pro’s getting ready to roll (at the much more respectable hour of 11am).

What’s the longest amount of time you’ve been deprived of sleep and why?

7 thoughts on “Creative Progress and Tour Down Under”