It’s amazing what you can do with a bucket of water, a mop and some pavement!

I saw this guy a few times, in the same spot, on Swanston Street in Melbourne.  He was diligently working away, not paying any attention to anyone, just working methodically away at his art.  Head down, focussed.  Even when it started to rain he kept going.

He gave the impression he didn’t care if anyone paid him for his time or not, he just kept on going, and going and going.  I admire that passion.

I stopped to watch for a while and I did pay and snapped a few shots.  (I really do love the convenience of mobile photography!) 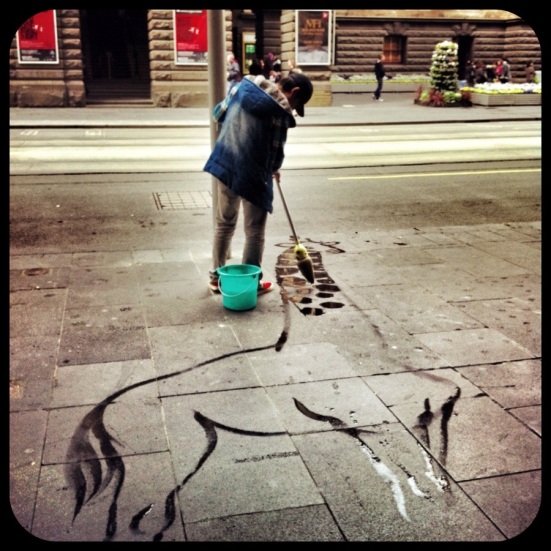 While he might not have come across as overly personable, he was a total gun with that mop!  Mind you, I don’t think you’d invite him to mop your kitchen floor as he puts more on than he takes off!

I’m not entirely sure how he kept the water where he wanted it but I could see that the mop was kind of like a big, paintbrush-shaped sponge (not scary mops like Walt Disney’s).  Clever but so fleeting – it was kind of sad when I wandered past on another day and he wasn’t there.  It was like he’d simply evaporated, along with his art.

If you’re interested in more of my Melbourne art discoveries please troll back through:

6 thoughts on “Pavement Art with a Difference”